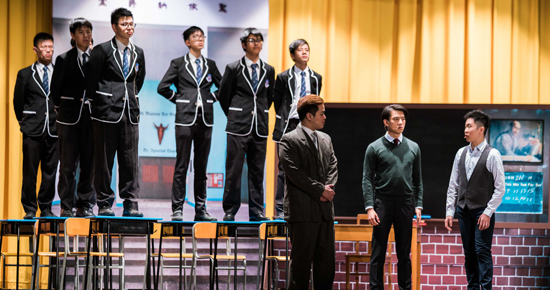 Musical Drama, Legacy: A Celebration of a Century

Congratulations on the brilliant production of our musical drama, Legacy: A Celebration of a Century, last Friday and Saturday! It was truly entertaining and uplifting, with exceptional music, singing and acting. The quality exceeded even the high expectations of many in the audience! It is the pride of Wah Yan!

The success would not have been possible had it not been for the effort and unfaltering devotion of Ms. Leonie Cotter, who took the lead in the production, as well as Ms. Tina Lunde-Pickover as the Assistant Director. The composers, Mr. Mark Loh, Mr. Kasper Chan, Mr. Sam Lau and our esteemed alumnus Mr. Leon Ko, created outstanding music. Every staff member from both Wah Yans who provided support, every student who joined the production, and all of our alumni, parents and friends who came and watched the spectacular show made the event fabulous.

We needed to, but we missed acknowledging explicitly in our shows that the story was inspired by the movie Dead Poets Society as well as many true stories in the two Wah Yans shared by alumni of different generations. With these beautiful stories and an ingenious blend of humour and emotion, Legacy touched the hearts of our current and past students as well as friends of Wah Yan who came to the shows.

This musical drama is an impressive kick-off for our series of celebratory events in our anniversary year. Coming up soon, we will have our Gala Dinner on 30th January, our Mass of Thanksgiving on 12th March, the Jesuit Education Forum on 25th April and the Guinness World Record Activity in July. We look forward to welcoming you in our anniversary events.