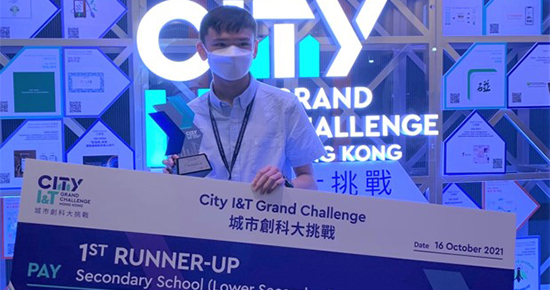 Nilsson Albin Olof of Class 2S and his teammates from the Hong Kong Academy for Gifted Education won the 2nd runner-up award in the Secondary School Section (F1-3) of the City I&T Grand Challenge. Their award-winning proposal, EcoVender, is an innovative reusable utensil lending system that aspires to alleviate the excessive use of plastic utensils, contributing to environmental sustainability. Their ingenious idea is a manifestation of the teams’ acute observation skills and creativity.

The competition was organised by the Innovation and Technology Commission together with the Hong Kong Science and Technology Parks Corporation, which attracted 1250 local and foreign entries.  740 proposals were put forward on an individual or team basis, among which only 24 were shortlisted for the finals to compete for the top prizes.