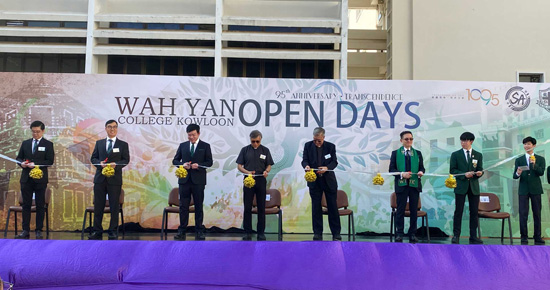 Convoyed by two drones, as the sparkly golden ribbons descended from the clear blue sky, the 95th anniversary of Wah Yan College, Kowloon was officially kick-started on a gloriously sunny day in a new decade, 11 January 2020.

The Open Days over the weekend featured an impressive line-up of programmes, which included an extensive repertoire of music performances, the grand opening of the STEM Laboratory, exhibitions and workshops showcasing students’ creativity and intellect, and a range of fun football games.  This was an opportune time for all Wahyanites and friends to connect – whether they are kids or the aged, at home or abroad, they all bore witness to our cherished history of nurturing men of human excellence for almost a century – and we were glad that they were there to transcend with us to the next century.